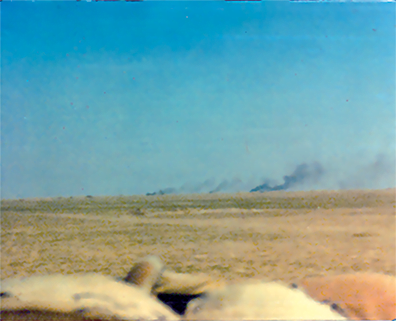 At not much after midnight on the morning of the 27th, I have my first really vivid memory since crossing the berm on the 24th. It’s as dark as the inside of an abandoned mine shaft at night, with some low level clouds covering the stars, and fog limiting naked-eye visibility to a few hundred meters. We have pushed east several more kilometers, and have halted in place as an artillery barrage pounds the objective about 4 km east of our position—when I am head-up in the hatch, I can count about 12 seconds from flash (artillery hitting the ground and exploding) to bang (when the sound of the impact reverberates through my chest), so the impacts are about that far away.

There is no chatter really on the troop command net, so I switch up the auxiliary radio to the squadron net. That network is blistering with chatter, but none of it really reporting anything of interest to us (no contact reports, no casualty reports), so I reset everything back to normal. I’m so tired right now it’s not even funny. It’s almost to the point where I’m considering using toothpicks to hold my eyelids open, like an animated character on a Saturday morning cartoon show.

Time for another Tanker Shot. Even though the artillery should be spiking my epinephrine, and probably is, at this point my body is inured to the effects of it and has started telling my adrenal hormones to piss off. Taster’s Choice® MRE instant coffee packet, check. MRE sugar packet, check. MRE creamer packet, check. Water, check. Down the hatch.

It’s nasty. But it works … at least a while.

We’ve been sitting idle now for about an hour. Nothing on the troop command net. Very little on the squadron command net, switching back and forth. Artillery stopped falling on the objective ahead, for maybe a half hour now. It’s agonizing. Why are we just sitting here? I realize that my Tanker Shot has worn off and it’s time for the big guns.

Before we left the US on 30 SEP 1990, I made sure to pack the final straw in any campaign against sleep deprivation, two 40-pack boxes of Vivarin® caffeine tablets. Two hundred milligrams of caffeine per tablet, and up until now still unopened. Tonight’s the night. I also know that this is the last straw—it will probably keep me awake for a few hours at least, but after maybe a second dose I’m going to be in big trouble without some sleep. I think most, maybe all of us were in the same boat.

As I’m anxiously awaiting both the word from the CO to move out and the caffeine pill to kick in, artillery starts up again—not as far away this time. A sheaf of artillery lands, maybe 2 km away. Thirty seconds later, four or five new impacts land but this time about a kilometer and a half away … steadily marching toward us, not away.

After another sheaf impacts within a thousand meters, the troop command net lights up with exhortations to assault the objective—the artillery isn’t friendly, and we need to get up there and silence whatever units are firing it at us. We tear off, I close up my hatch, and now the adrenaline plus caffeine is really kicking in big time.

With SGT Planter scanning through his thermal sights, and the rest of the platoon and troop blitzing forward, we roll up on our objective—another small air field in the middle of nowhere—without contact. By now it’s approaching 0300. After the squadron consolidates, we set off to the east again, pausing for a few minutes while the 3rd squadron clears their area and transfers control to the 82nd Airborne.

Once the consolidation and transfer of control is completed, I’ve somehow managed to stay awake until the morning breaks. Or at least I think it has; the cloud cover is thick and gray, but we can see now so I guess it’s daytime. I’ve been awake now for at least 77 hours in a row, and it sucks. There is a light of hope, however. As we’re consolidating just east of this objective, we’ve stopped in place and SFC Young has started a sleep plan—a 75% plan, where three crew members stay alert and one is able to go to sleep. The LT orders me to sleep, something that I am in no way shape or form going to fight back against. I grab my tanker’s jacket, hop on the back deck, and in what must have been just seconds, I am asleep. So asleep, as I write in my book, that I almost sleep through an enemy artillery barrage (fortunately, SGT Planter is able to wake me up so we can haul ass backward). After we pull to safety, another FRAGO sends us moving again.

Off we go, on another movement to contact east, and in the process run across a small enemy force, possibly the one directing the artillery. This time, they either don’t realize what’s going on or are determined to defend in place. There’s a brief exchange of fire. Three enemy PCs are destroyed, and POWs are processed. The skies have cleared, though, so that’s nice.

Another few hours later, near dusk, we make additional contact with enemy forces. These, however, are less determined that those at our previous encounter, and surrender immediately. What they are, however, is members of the Republican Guard—the Tawalkana division. This is much more of a surprise. These are supposed to be the best in the Iraqi Army, battle tested and fiercely loyal, yet they were no more willing than the conscripts we’ve been seeing to stand and fight. Interesting.

Most of the rest of the day we spend moving and pausing, moving and pausing, until we get to a position about 10 km or so from the ar Rumaylah oil fields, as the top of the trap to prevent the Republican Guard from escaping north. As night falls, we set up a screen line and for the first time, a real sleep plan. I had guard duty first, and then I slept—unhindered, this time.

Eighty-eight hours awake, minus about 2 minutes on the back deck earlier on this day. But, at least there was some sleep. Just in time, too, as we’d find out in the morning.