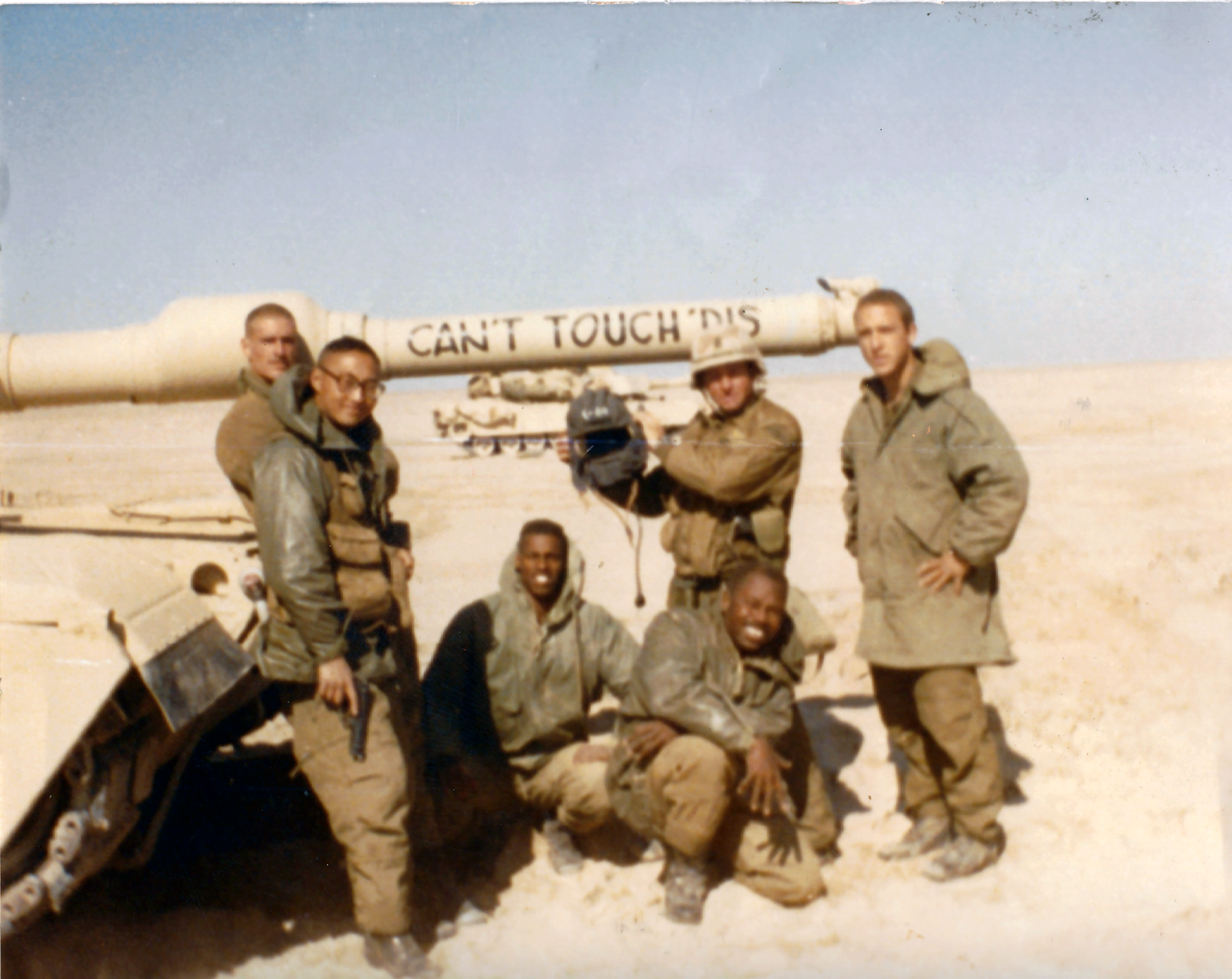 Stand-to on the morning of the 28th was a vastly different experience from the most recent previous stand-to, on the morning of he 24th. For one, this time we didn’t deploy those God-forsaken camo nets—they work, but holy crap they are difficult to erect and take down, as they catch on absolutely everything. For two, it was much more efficient and focused. I distinctly remember moving very fluidly through my pre-operation PMCS (preventative maintenance checks and services), much more on muscle memory than I’d previously experienced. For three, because we were expecting to get additional orders any second now—or even be attacked by retreating Iraqi units—there was a sense of urgency and cold calculation that had never been present before. As I’ve said before, though, don’t get it twisted: I, we, did these things in the past with deliberate intent to do them correctly. The consequence of the last four days, however, cannot be overstated. Even small amounts of combat changes a soldier’s perspective.

We assumed REDCON-1, and awaited further orders, which did not come immediately. As a result, we stood down to REDCON-2, and went about performing some maintenance we hadn’t been able to do yet: one tank per platoon (starting with someone else’s tank, not C-21 as I don’t remember doing this immediately) pulled their V-Packs and did a quick-and-dirty cleaning on them, while everyone else did things like checking track tension, cleaning small arms, and so forth. As with other things, this was a far more efficient and straightforward period of maintenance than I’d experienced before. Everything was much smoother, no wasted time or movement. It was a bit surreal to be honest.

We ate breakfast. We shaved. We wiped out our very stinky pits and crotches. We made coffee (!!!) and hot cocoa. It was about 50° F (10° C) at sunrise with a 20-ish km/h wind, still quite chilly and breezy, and there was a dull pewter overcast of mammatus clouds overhead (something that made hot coffee even tastier). It hadn’t rained on us yet, but it sure felt—and looked—like it wanted to.

With a full night’s sleep, a belly filled with Omelet with Ham, Potatoes Au Gratin, and hot java juice, and all of the delayed maintenance completed, all that was left to do was hold fast and wait. Waiting is usually the hardest part, but today it was a welcome respite.

Since stand-to, it’s been about two hours thirty minutes, so now roughly 07:30 hours. The radio has that distinctive click-ping of the radio transmitting through the encrypted SINCGARS channel, incoming from the troop command net.

Something something cease-fire something something zero eight hundred something something something. It was not what I expected to hear, and I doubt that anyone who was not already listening to the squadron command or higher radio nets expected it, either. What was transmitted was that at 0800 local time, there would be a cease-fire in place. From 07:45 to 08:00 there would be an artillery barrage preceding it, with artillery targets being fired upon until the cease-fire took effect. My brain just didn’t want to process it right, but word spread quickly throughout Cyclone troop. Additionally, we would go to REDCON-1-minus at 07:45, just in case things went south on us, and then at 08:00 would likely stand back down to REDCON-2. Rules of engagement also changed, going from “if it isn’t definitely friendly, shoot it” to “if it isn’t shooting at you, don’t shoot at it.”

As was the order, however, we packed up and got our butts into REDCON-1-minus (ready to move immediately except no engines running). We heard the batteries of artillery going off, all friendly. The cacophony lasted fifteen minutes, and then it ceased.

A few fretful heartbeats thump-thump-thumped in my chest as I anxiously sat on tenterhooks, my left hand clenched on the grip of my loader’s M240 machine gun and my right hand on the edge of my hatch. No further orders came, no enemy response was noted or seemed forthcoming. I took a breath.

And then howled. As did several other scouts, tankers, mortarmen, medics, wrenches, and other assorted combat and combat support soldiers within earshot. It seemed as if maybe, perhaps, we’d all made it.

That feeling of elation and survival was real, and also (again) quite sur-real. There was a lightness in my movements, almost giddy in nature. That lasted for about two and a half hours.

The radio did that click-ping thing again, and the troop CO ordered everyone to REDCON-1, with a FRAGO to follow. There was another of those pregnant, charged moments of silence, and then the FRAGO came out. A friendly Blackhawk helicopter, believed to be a MEDEVAC for a downed pilot nearby, had been shot down about 20 km to our east. The Regiment’s 1st and 2nd squadrons were ordered to execute a movement to contact toward the crash site, secure it, and then establish a screen line to the east of it to protect the recovery operation.

You remember that light, giddiness I mentioned? Gone.

We waited for the final order to move out, and off we went. After maybe a half hour or so, we started seeing evidence of the Iraqi defense in the area, with dug-in trenches and hasty fighting positions dotting and criss-crossing the desert floor. There were clear indications of combat damage, with scoring and blast damage evident on the ground, as well as occasional unexploded munitions. We passed several pits in the ground that had obviously been occupied at some point, and entrances to what looked like small bunker complexes. At each one, I trained my machine gun on whatever entrance I could see. At each one, not a soul emerged—every one of them appeared to be abandoned.

Ten kilometers, eleven kilometers, twelve, fifteen, twenty … and then, after E troop reported that they’d secured the crash site, there was excited chatter from our own Red (scout) platoon about a nearby airfield, which was decidedly not unoccupied. Reports from 2nd squadron came through: wire fence, tanks, PCs, and anti-aircraft weapons on the objective. Cyclone troop’s CO ordered the tanks forward, coming on-line within about 2,500 meters of the southern edge of the airfield. I could see the tower with my unaided eye, but pulled out the binocs to get a look at the rest of the situation.

Initially, E and F troop reported that the vehicles on the airfield might be abandoned, but then enemy troops were witnessed re-mounting them and all three of E, F, and G troops started taking fire. Cyclone troop responded, and with vigor. The LT gave the fire command, I armed the already-loaded gun, and SGT Planter loosed a HEAT round toward a PC—which hit the fence first, and prematurely detonated. While it was flying downrange at approximately 1,500 meters/second, I threw a second HEAT round into the breech and rearmed the main gun. This time, an Iraqi BMP exploded from our HEAT round, and after I’d reloaded the main gun again SGT Planter turned back to me and said “we got it!” with the cheesiest, shit-eating grin on his face. I replied in kind, and we threw each other a high-five over the top of the main gun breech.

At this point, the LT left SGT Planter and myself to fight the tank while he ran the platoon, so SGT Planter scanned and found target after target. I loaded, and popped my head up in between shots to scan and watch for impact with binoculars. When main gun targets became scarce, SGT Planter found troops in the open, and lit them up with the coax machine gun.

Several rounds later … couldn’t have been more than 2 minutes … and we got a CEASE FIRE order. Friendly troops were on the airfield collecting prisoners and we didn’t want to have a fratricide incident. Cyclone troop reformed south of the airfield, and continued a movement to contact east. Apparently, air assets had identified additional enemy forces to the east of the airfield, and we set off to investigate.

After a couple of kilometers, RED platoon reported contact with enemy PCs, and we sped up to help out. At least one of the RED platoon Bradleys had knocked out a BMP, which was smoking right in front of my tank maybe thirty meters. It had been occupied, and now was most certainly not, as I could smell that whatever enemy soldiers were in the PC were definitely KIA and burning with the on-fire vehicle.

As we paused, and the scouts consolidated their screen line position, our platoon sergeant came over the platoon net extremely excitedly reporting the presence of tanks. In the rush, the scouts had driven right past them, and we were sitting in a scorpion’s nest of enemy tanks, PCs, and other vehicles in hide positions (see the above image for reference). From ground level, they were easy to miss. Once I poked my head out of the loader’s hatch, I could see several enemy vehicles. A T-72 to the left side, three MT-LB PCs to the right rear, and a truck and a trailer immediately in front of us.

The trailer in particular caught my attention. After the LT reported to the CO that there were still enemy vehicles in our area and we needed the scouts to backtrack to help us clear it out, I kept seeing the door in the side of the trailer open and shut. Open, and shut. The wind? Is it the wind I see? Maybe. Maybe it’s the wind blowing it slightly open and then closed again. I did, however, train my machine gun on it, just in case—and then it opened fully and a man with a rifle came out of it. In my haste (and, to avoid my LT thinking I had lost my mind if it had been just the wind), I hadn’t said anything about the trailer door, so my machine gun burst into the door and the Iraqi that had come out of it scared the crap out of everybody. As I told the LT what I’d seen, he had SGT Planter open up on it with a coax burst, and then called a cease fire.

A few minutes later, the scouts had returned, and we cleared out the complex. We took a few POWs there, and several items of great intelligence value, all from a Republican Guard unit—likely the Al-Faw division—and after securing the site, took up screen line positions just east of the quarries where we found them. A LOGPAC (resupply) came through and topped off all of our tanks with fuel and ammo.

By about 1600, we were wrapped up with our FRAGO, and maintained our screen line. We went to REDCON-3, and tanks were pulled off the line one at a time to punch their main gun tubes (cleaning them out), clean out the engine’s V-packs (filters), and perform more detailed maintenance than had been possible up to this point.

Also, for the first time since we’d crossed the berm, we got a hot meal from the squadron kitchen … T-rations, but what can you do? … and mail.

From Valentine’s Day. Now if that doesn’t beat all …

Oh, and we took a few pictures. The topmost image is some of my tank platoon posing with one of the Iraqi tanker helmets from the tanks we’d captured. Here’s a couple of me with the same helmet:

Which was how the afternoon of the 28th wrapped up. Food, mail, maintenance, guard duty.

Forever with the guard duty.