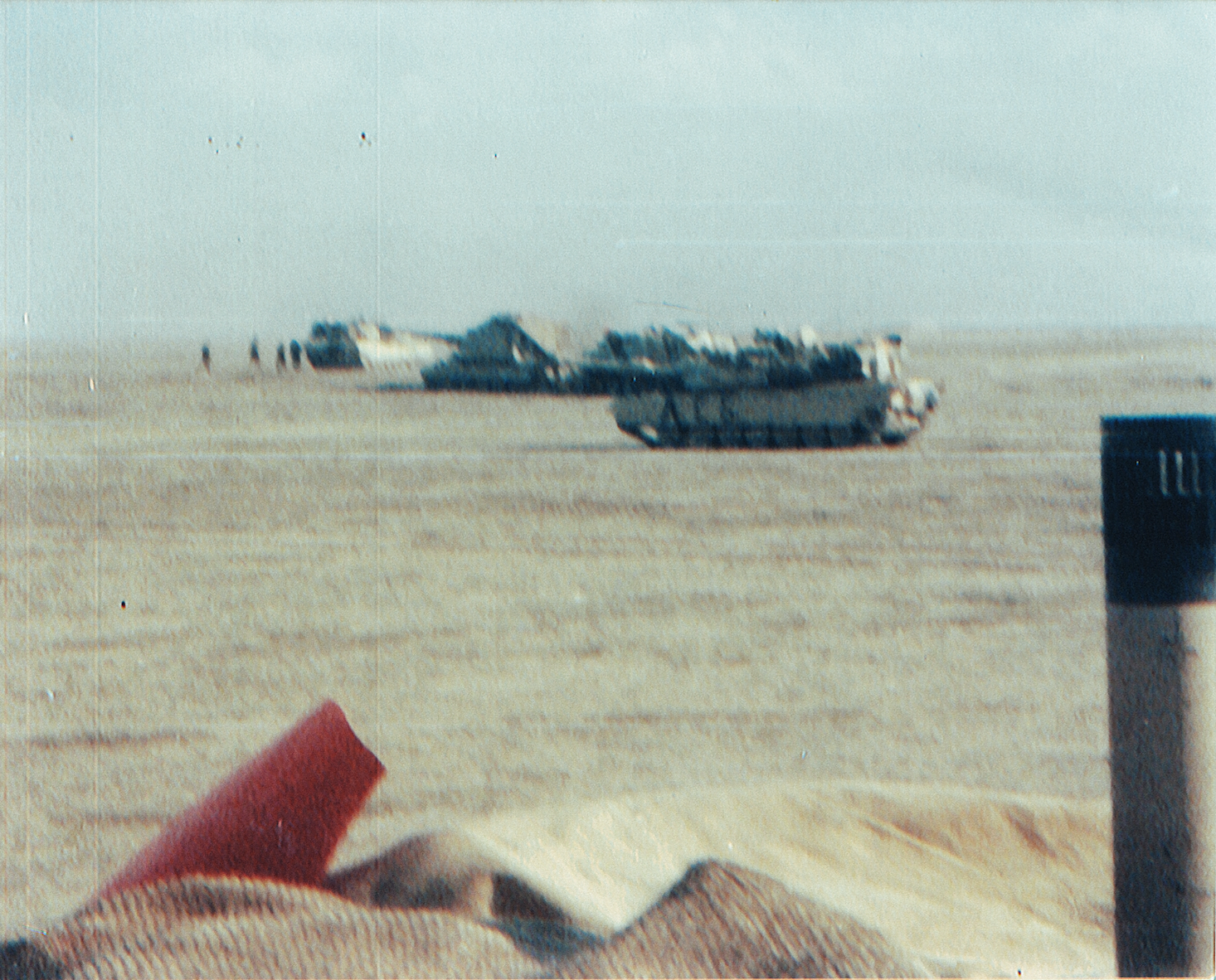 As we continued to man our final defensive positions with time seeming to stretch forever on, a couple of things finally caught up—most importantly, mail. In addition to resuming normal US Army feeding protocols (fresh food when possible, T-rations otherwise, MREs only when necessary), the rest of the non-combat supply chain was able to catch up with us. Many received piles of letters and even some packages, a few with items that were requested a month prior (and may have proven useful during our ground combat) but just hadn’t arrived yet.

For my part, I got a bunch of letters from various family and friends, and a care package of batteries and cookies from my parents. There were Valentine’s Day cards galore (yeah, it was a month behind!) and a couple of letters on cassette tape, replies to tapes sent in mid-January just after the first few days of Desert Storm.

Aside from mail, there was little of note going on, and as we’ve already discovered I just don’t remember a whole lot of the days between the end of combat operations and the last couple of days we were in theatre. I do remember that the weather was fickle—something often true in the spring—vacillating between an overcast wet and chilly with a cutting breeze, and almost warm under bright blue skies.

There were some unfortunate events that occurred during this time, however. Several soldiers from 2nd Squadron were accidentally killed (in separate incidents) when dud/unexploded munitions detonated, providing a stark reminder to everyone that even if combat was over, it was still dangerous just to be around the combat area. We could not let our guard down yet.

In addition, there was a lot of ammo, captured enemy equipment, and other items to destroy—something that occasionally included setting up ad-hoc firing ranges and letting crews go berserk firing weapons … a makeshift gunnery range “mad minute,” in a sense. We also brought back a few pieces that were still in museum-quality shape for the 3d Armored Cavalry Museum (including the 2S3 self-propelled artillery gun in the center of the image above), items that I believe are still on display with that museum today.

On 07 MAR, we received orders to move to REDCON-1 and then set off on a road march southbound to return to our original assembly areas, making our way to the area of the Tapline road in Saudi Arabia. By the 12th, all of the Brave Rifles were back in Saudi Arabia. Although we’d already gotten back to performing our regular maintenance and filling out our paperwork to document any issues we ran across, it was here and now that our cleaning and preparation began in earnest. There was no doubt we would be heading home soon, and the more work we could get done here the less work we’d have to do when we got back to Ft. Bliss. And so, our platoon sergeant got us all busy cleaning the snot out of everything we could, from small arms to the inside of the turrets and driver’s stations, and basically everything that was accessible without needing a crane or specialized assets.

My last real memory in Saudi Arabia is being back in the area of the port at Al Jubayl, where we were packing up all of the crew-served equipment back into our tanks, securing all of the sponson boxes, and packing items into CONEX containers for the shipment back to Ft. Bliss. It was a bright, sunny day and roughly 65° F (18.3° C) with a slight breeze to keep things interesting. All around us were the fervent workings of US Army Transportation Corps soldiers marshaling our equipment, lining up tanks and Bradleys and other vehicles along with CONEX containers and other equipment, ready to be moved onto the waiting RO-RO transport ship SSCape Inscription, docked nearby.

Along with the equipment leaving port, however, was a singularly sobering sight, one that I wasn’t sure I actually remembered (but rather that I’d dreamt it, or imagined it) until another of my Brave Rifles brethren posted a picture of it on social media recently: pallets of body bags. Dozens of pallets, equating to thousands of body bags.

I don’t believe that our leadership actually thought we would suffer the worst-case scenario, with a recalcitrant Iraqi Army able to inflict significant damage to coalition forces slogging northward, defending in depth with obstacles and artillery attritting our advancing forces with deadly effect, then counterattacking with Republican Guard forces and thereby able to bring the UN and the coalition to the bargaining table from a strong position—a position which would likely have seen those pallets of body bags having been broken open and sent back to Dover Air Force Base one at a time, bearing an American who had given their last full measure of devotion. But they did have a contingency for it. To my mind, that signals that they really did make a lot of exceptionally tough decisions—it wasn’t just luck, but a combination of thorough planning, excellent training, solid technology, and iron will that not only avoided such a grisly outcome, but turned in a masterful performance of warfare. A performance that continues to echo, rippling out over the last 30 years and impacting two generations of warfighters since.

I don’t recall whether we slept that night at the port, or whether we moved immediately to board the aircraft which would start our long flight back to the States. I do remember the flight home, however, which I will talk about in the next post.