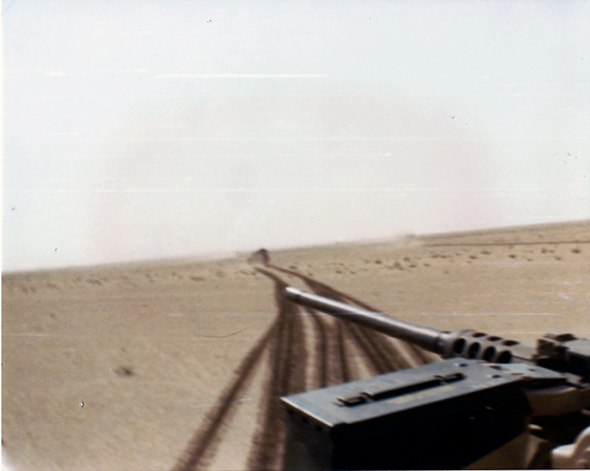 Everything goes to eleven

With night having fallen on the 25th, we continued to push harder, to get more exhausted, and started making actual contact with enemy forces. Sometime over the course of the dark hours of 25–26 FEB we had met all of our advance objectives, and were conducting a moving screen for the XVIII Corps right flank with the 24th Infantry Division to our north, with both units starting to pivot to the east facing toward Basra.

First among the new FRAGOs we received was for our limit of advance to be pushed forward, and for us to move to and occupy an intermediate position, moving into positions to screen the 24th Infantry as they moved into position to assault on two air fields in their immediate area, Tallil and Jalibah. Third Squadron occupied an objective west of Al Bussayyah sometime in the early morning hours, and then transferred control of this objective to the 82nd Airborne Division.

During this time, what is in my recalled memory is a lot of the same relentless driving as had been going on both of the two days prior. A lot of chilly nights and empty desert. I also recall one specific incident that involved my CVC helmet.

Just a couple of days prior to the start of Operation Desert Sabre, there was an informal, metaphorical gauntlet thrown down at the feet of my crew by the crew of C-66, the CO’s tank. They suggested that their crew was far better at individual tank maintenance than we were, something that was profoundly offensive (and, of course, patently incorrect). We pushed back at such arrogantly boisterous claims, and so the crew of 66 suggested a bit of a wager: every time a crew had an issue with their tank that arose from that crew’s failure to properly maintain their tank, it would be marked down; whichever crew’s tally had the fewest marks would be the winner and the losing crew would buy beer and steaks when we got back to the States.

To this point during Desert Sabre, neither crew had accumulated a single mark—any time we had a hot refuel, we both (and most if not all other tank’s crews) took whatever time was available while other vehicles in the troop were fueling up to do basic “during operation” maintenance, walking track to inspect for loose bolts and end connectors and such. As a result, there just hadn’t been anything to mark down.

That is, until the shell of my CVC helmet flew off during today’s march northward. I don’t recall the specifics, but what I do remember is that I had one of the few CVC helmets that came with a Kevlar shell (as most of the shells are fiberglass, but older versions were Kevlar). What I barely recall is that there may have been issues finding the straps and other hardware that snapped the outer shell to the padded liner (which also housed the earphones and microphone), and so my shell was held in place only by a hook-and-pile fastener. With that, there was one or two rectangular patches of the hook portion that were glued into the shell’s inner surface, and two patches of the pile portion that were part of the liner.

Well, mine gave way. I remember the moment it happened, too. We were marching north at about 25 km/hour—I know you’re shocked to find that we were still incessantly moving—and I was reaching out to either grab the MRE box to distribute MREs to the rest of the crew, or was putting the box away again afterward, when whoosh off it flew. I must have jostled something, or maybe we hit a bump, but it was gone, floating away into the desert, presumably never to be seen again …

Except that—naturally—the crew of C-66 happened to see something unusual sitting on the desert floor, and made a quite mocking radio call to announce that they’d managed to find a particular item that probably almost certainly definitely belonged to C-21 (it had my nickname written on the back bottom edge in black Sharpie®), and that they would hold onto it until such time as it was safe to return it to the proper owner.

Dawn breaks, as do some of the enemy

From the beginning of morning nautical twilight on the 26th we started seeing enemy personnel more frequently, and so far none of them are in organized units but are instead stragglers who have managed to escape their units without being shot by their Iraqi leadership. In the morning and afternoon of this day our first (scout) platoon (a.k.a. “Red” platoon) would come across a few such enemy soldiers who immediately surrendered, and were given food and water and then processed by the MPs. Scout and tank platoons really don’t have any organic method for dealing with enemy POWs, but MPs do (it is part of the MP job description to guard prisoners, and it doesn’t matter who those prisoners are) and 3d ACR had an organic MP element just for this purpose. Well, okay, not only this purpose, they also do traffic control and ingress/egress control and a few other police-y things. But POWs are one of those things.

We, however, continue without breaking

We continued our march, acting as a moving screen line to the south and east of the 24th Infantry as they moved to secure the two air fields. Late in the daylight hours we occupied our next objective approximately 20 km northwest of Al Bussayyah. As we approached this objective, scattered reports of light enemy contact and resistance peppered through the various command nets, although none of it was in 1st Squadron’s area. The fact that anyone was engaging enemy forces on a radio net I could hear was enough to get my brain to kickstart the epinephrine again, so I was quite and fully awake and alert.

Once we secured the objective, for the first time we actually stopped and did the first stationary resupply of the ground war—mostly fuel, food, and water. Although I think there might have been time to figure out how to get a power nap in, my blood was filled with catecholamines and I was in no way going to be able to get even a few seconds of sleep. So, awake I stayed. By the time we left our objective after nightfall, eastbound in a movement to contact toward another small air field slightly northwest of Al Bussayyah, I had been awake for 65 hours straight, with no end in sight. I suspect many of my troop mates were in exactly the same boat, though I hope some of them had been able to catch a few winks during our pause on objective Red Prime. We were going to need all of our energy for what was coming.

Oh, and I got my helmet cover back on Red Prime, as well. And I grabbed wire and snips, threading the wire through small holes where the missing straps would have been screwed into the cover and punching them through the material of the liner, then twisting them together. Almost like sewing the damned thing onto the liner with metal wire thread. It worked well enough, as I didn’t have any further trouble with it, but crap. First ding of the war and it was all because of that stupid helmet cover.