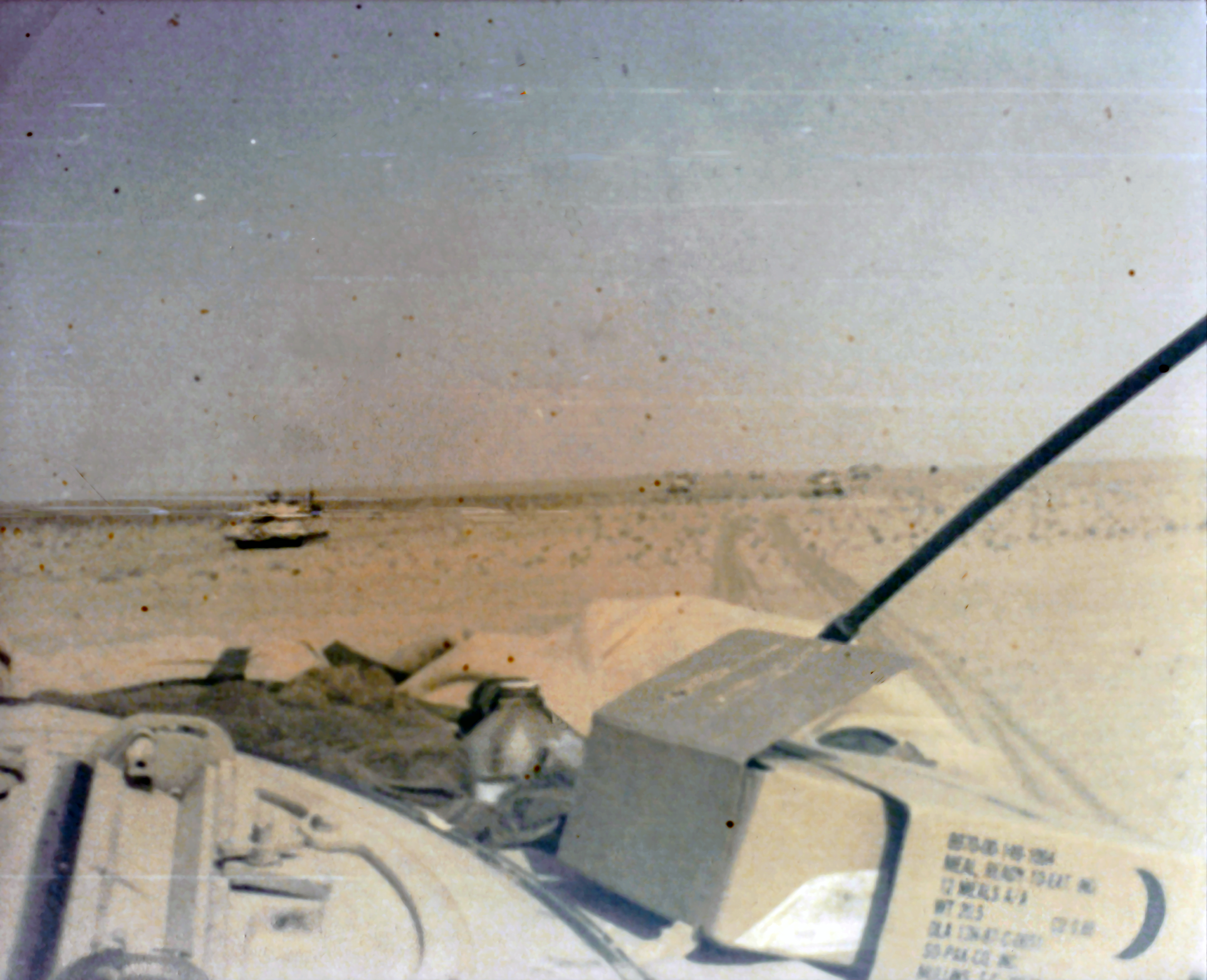 In the preparation for writing my book, as well as revisiting reference materials while preparing these 30th anniversary posts, one thing was made stunningly clear: while I really don’t have a lot of specific memories of the second day (25 FEB 1991), it’s because pretty much all that we did was drive northward … and drive some more … and drive even more. So it’s not as if things happened and I forgot them, it’s that no, really, there just wasn’t much of note going on.

Except … well, I was still awake. I think pretty much all of us had zero opportunity to get even the cattiest of naps, and instead relied on (initially) brief occasional dumps of adrenaline as new orders arrived, reports of possible enemy contact were relayed over the radio, or we were approaching control points and objectives that were potentially defended.

That didn’t work forever, though. By the time of sunrise on the 25th, I was exhausted. With the sun up, it would be a lot easier to fight off the tired, and the chilly air helped too. Of course I was wearing the CVC coveralls and my CVC tanker’s jacket, my CVC helmet, and goggles—always goggles while moving, just like always gloves while on the tank in general—but I also had on the CVC balaclava, which worked really well at keeping most of the cold (and the dirt) off my face. Not all of it, though, because there always seemed to be edges where wind would cut through and smack my skin. Not much to do about that except adjust things occasionally when one part would get too cold or dried out. It did help that I was mostly facing to the left rear of the tank, with my loader’s M240 machine gun oriented that way as well, so I think the LT probably had the worst of that biting, piercing cold. This is something that is reasonably easy to replicate, in fact. The next time you’re the passenger in a car in the wintertime, put on a ski mask or balaclava and some goggles and stick your head out of the window while the driver maintains a 20-30 kilometer per hour pace. That’s what we’re talking about here.

As the air, rear, and left-side guard, it’s important to scan both the horizon and the visible ground in those areas, and keep vigilant. It can be difficult to do under even normal circumstance, but after having been awake more than 28 hours in a row it becomes a constant struggle. Not only a struggle to maintain situational awareness, but also one to avoid a desert combat version of “white line fever” (a.k.a. “highway hypnosis”)—becoming mesmerized by the passing, mostly unchanging desert landscape, dulling reaction time and even creating pretty serious time compression, where minutes or even hours of time can pass with no conscious recollection.

So once past the first 24 hours or so, the challenge is to maintain that focus. One way would be to get some sleep—but there isn’t time for that. In earlier conflicts, tank crews (and other soldiers) from many nations were issued pills that would help them with their focus, often pills that contained amphetamine or closely related compounds. The US Army did not issue these pills when I was on active duty, certainly not to any of the units that I served with. There are still rumors that perhaps pilots or SF might have had access to them, but I was not a pilot nor did I serve with any SF units, so I have no idea about that. What I do know is that we certainly didn’t have any such bullshit—pardon the language.

So how did we stay awake and maintain focus? Well, it was a struggle, and I can personally guarantee that the focus was not always at 100% … and that’s just the way it goes. I did my best, always, but I can also say that there were definitely times where I shook my head because I realized I’d succumbed to the desert hypnosis. Being a coffee drinker, I would have gotten some java juice … except that to make it, we’d need to be stationary for a few minutes, and that also wasn’t happening. I did have some Mountain Dew still left in my helmet bag in the turret, so I would pop a can of that first. Then when that stopped working, it was time for one of two magnificent concoctions, either Tanker Special Pudding (cocoa powder with the MRE instant coffee added to it, along with the sugar and creamer packets, and mixed with just a little bit of water) or Tanker Shots (MRE instant coffee, sugar packet, creamer packet, all emptied simultaneously into the mouth and swallowed with a mouthful of water).

Tanker Special Pudding is less nasty than it sounds. But it was still kinda nasty, not gonna lie. The Tanker Shots were the penultimate trick, when other things had stopped working, and that tasted awful. Don’t believe me? Go get you a jar of Taster’s Choice® and eat a spoonful of it. Just don’t say I didn’t warn you!

There were more extreme measures, but they weren’t needed yet.

As the day dragged on, hot refuel after hot refuel and phase line after phase line, night started setting in and the challenges stiffened—we still were rolling north mostly unhindered, and except for Bravo Troop’s one POW incident from the day prior we hadn’t yet made contact with any enemy forces. To be fair, this was mostly expected. We knew this part of the desert was basically devoid of anything except sand, dirt, rocks, and occasional Bedouin nomads, and that included Iraqi combat troops. They just didn’t expect anyone to be out here, so they didn’t guard it. Big mistake, as they’d find out over the next three days.