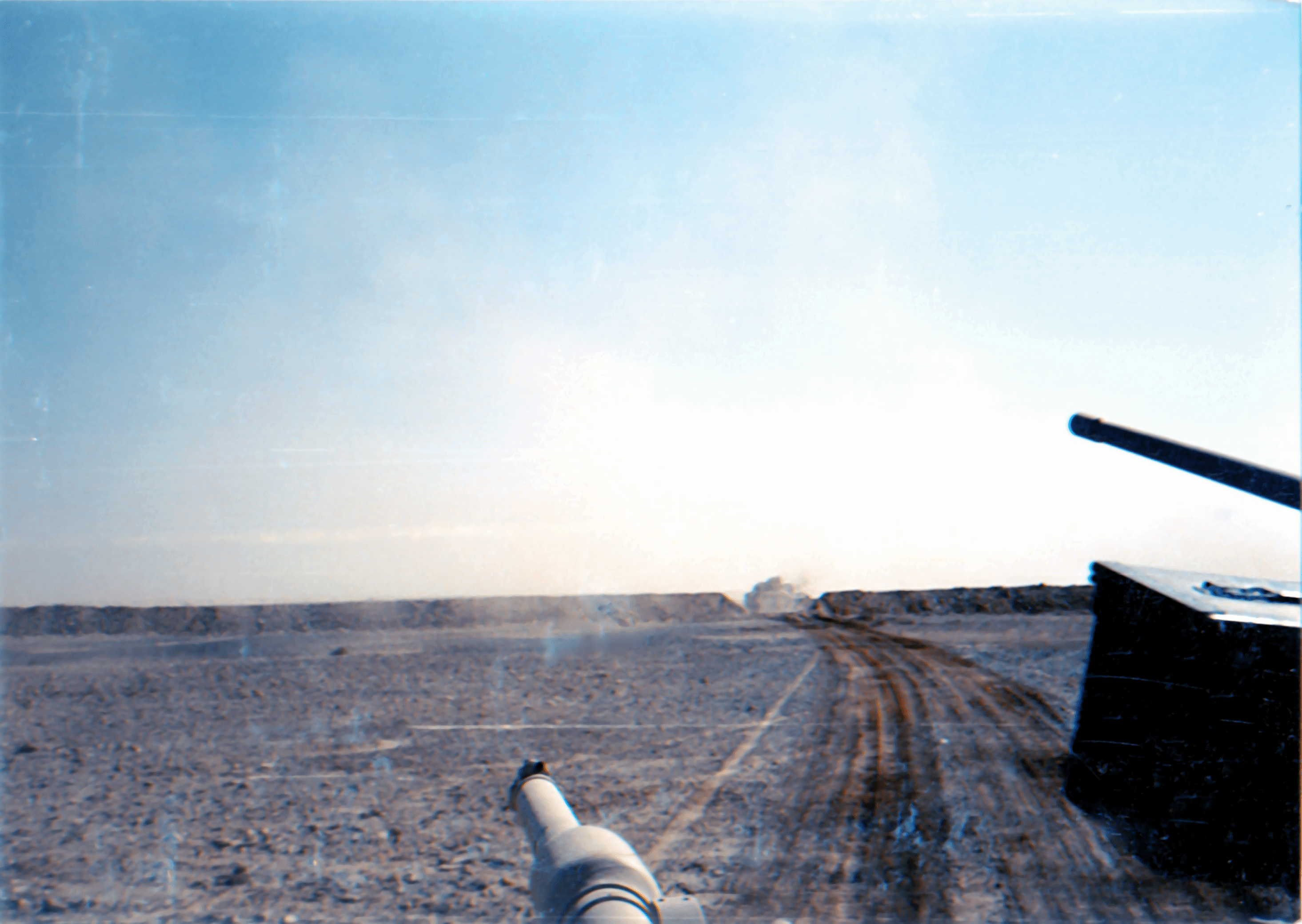 Crossing the Line of Departure

After awakening fifteen minutes prior (damn you, Army!) to stand-to, working with SGT Planter to pull the camo netting off the tank and get it neatly (yeah, right … “neatly”) stuffed into its stowage bag, Can’t Touch ‘Dis a.k.a. Cyclone White One a.k.a. C-21 is ready for combat. All personal equipment is stowed. All crew equipment is either deployed and ready to use, or is also stowed. I am sitting in the seat at my loader’s station, CVC helmet on, waiting for the countdown to start the engines—and just like that, I went from sleeping like a log to fully awake, dressed, and spoiling for a fight.

The fight didn’t come yet, however, and after everyone went to REDCON-1 we were stood down to REDCON-2 and told to await further instructions. As I’d noted in yesterday’s post, the OPORD was to begin our northward advance on day 2, 25 FEB, after the other two Corps-sized elements in CENTCOM had executed their initial battle plans. It was about 05:00 or so, and so command made the decision to just have units stay in place, eat an MRE breakfast, and wait.

I think if you ask just about anyone, not just a soldier but pretty much any human being ever, waiting for something unpleasant to happen (or, waiting for potentially unpleasant information) can be excruciating. Even people who are not prone to anxiety can get anxious, and people who are prone to it can advance to physical symptoms like chest pain, sweating, and nausea and vomiting. For a soldier wound up spring-like and prepared to pounce, however, it can border on infuriating—let’s just get it over with! They say to be careful for what you wish, you might just get it.

And so both the fulfilling of wishes and the Army’s penchant for having soldiers get ready to get ready fifteen minutes prior to fifteen minutes prior pays off in spades on the morning of 24 FEB 1991. We were ready, then we stood down and ate and had a few moments to let ourselves relax just a touch, and then all the timetables were moved up.

First, we got a FRAGO (fragmentary order) about 0900 to be ready to initiate our combat plan starting a full day earlier than anticipated, at about 1500 hours on the 24th instead of the 25th. To be best positioned for that, we returned to REDCON-1, and then executed a road march from that assembly area into one that was only a couple of kilometers from the line of departure—a hastily-dug anti-tank berm the Iraqis had erected several months prior—and assembled into an Israeli Box. There we waited for about three hours, from roughly 1000–1300, just sitting and waiting.

In the next 90 minutes or so starting at 1300, we saw three separate flights of helicopters, some the hunter-killer teams from Regiment’s Air Cav (4th) Squadron and some from 24th Infantry Division, flying north over our rough position. Initial reports that filtered down were that both the Marine/Army and Arab coalition forces were having very little trouble with the front-line Iraqi troops, who were surrendering in groups of tens and hundreds. They were apparently reporting major advances that were not expected, and so the VII and XVIII Corps’ timetable had been advanced by several hours (in our case, nearly 24 hours). We got another FRAGO to start crossing through the berm at 14:30, and right then was when I realized how lucky I’d been to get a full night’s sleep the night before. There wasn’t going to be much sleeping on the night of the 24th, it would seem (spoiler alert: it was worse than anyone anticipated).

Our platoon sergeant, SFC Young, called everyone over in front of the tanks and we had one last-moment pep talk, basically. He reminded us that we were the best tankers, the best soldiers, in the history of the world, and that we were about to go out and prove it to everyone else. As long as we kept our wits, do as we’d trained, and kept him up to date on our fuel, ammo, water, and food supply status, he’d make sure we all got back home. SSG Miller, the TC of C-22, led a short prayer, and then two sets of supply HEMTTs (Heavy Expanded Mobility Tactical Truck) showed up: one to top off the fuel tanks of every vehicle in the troop, and one with 120 mm HEAT (high explosive anti-tank) rounds for the two tank platoons plus the CO’s tank—a HEAT round for the breech, since we’d been carrying a full load of 40 rounds of main gun service ammo, sabot and HEAT, for several months. This was the capper.

A Berm Not Far At All (and definitely not too far)

Although I took the above and below photos as we were actually breaching the berm, we were close enough to see it with binoculars from our Israeli Box.

We went to REDCON-1 about 1400 local time, and then within a few minutes units began to cross in their sectors. As I note in my book, we were playing music from my Walkman® on our intercom—”The Shortest Straw” by Metallica—as we crossed over the berm, although once we had crossed over the berm and gotten past our initial phase line (PL CANOE) a few kilometers north, I killed the music and we advanced with just the bass of tracks on packed dirt, the baritone and tenor tones of the Honeywell AGT-1500 gas turbine engine, and the soprano shrieks of the hydraulic system.

The entirety of the first day of the ground war was spent hauling ass northward, stopping only to refuel—”hot refuels” the order of the day, with vehicles refueling while engines are still running. As night fell, we found ourselves in an undulating area of desert, and I recall trying to keep my eyes out for difficult terrain ahead of us (wearing the night-vision goggles) while also keeping my eyes peeled left and rear as the air guard. One Bradley from 1st Platoon rolled over, injuring their platoon leader Lieutenant Kelly Ouderkirk and another scout. They were recovered, and LT Ouderkirk refused MEDEVAC but stayed with the medics in the troop TOC (tactical operations center) instead.

Although we didn’t see any enemy forces that day, Bravo Troop did—capturing 8 enemy POWs who were apparently stragglers, having left their units at some point in the days just before we advanced.

We advanced the rest of the night without incident—or sleep.