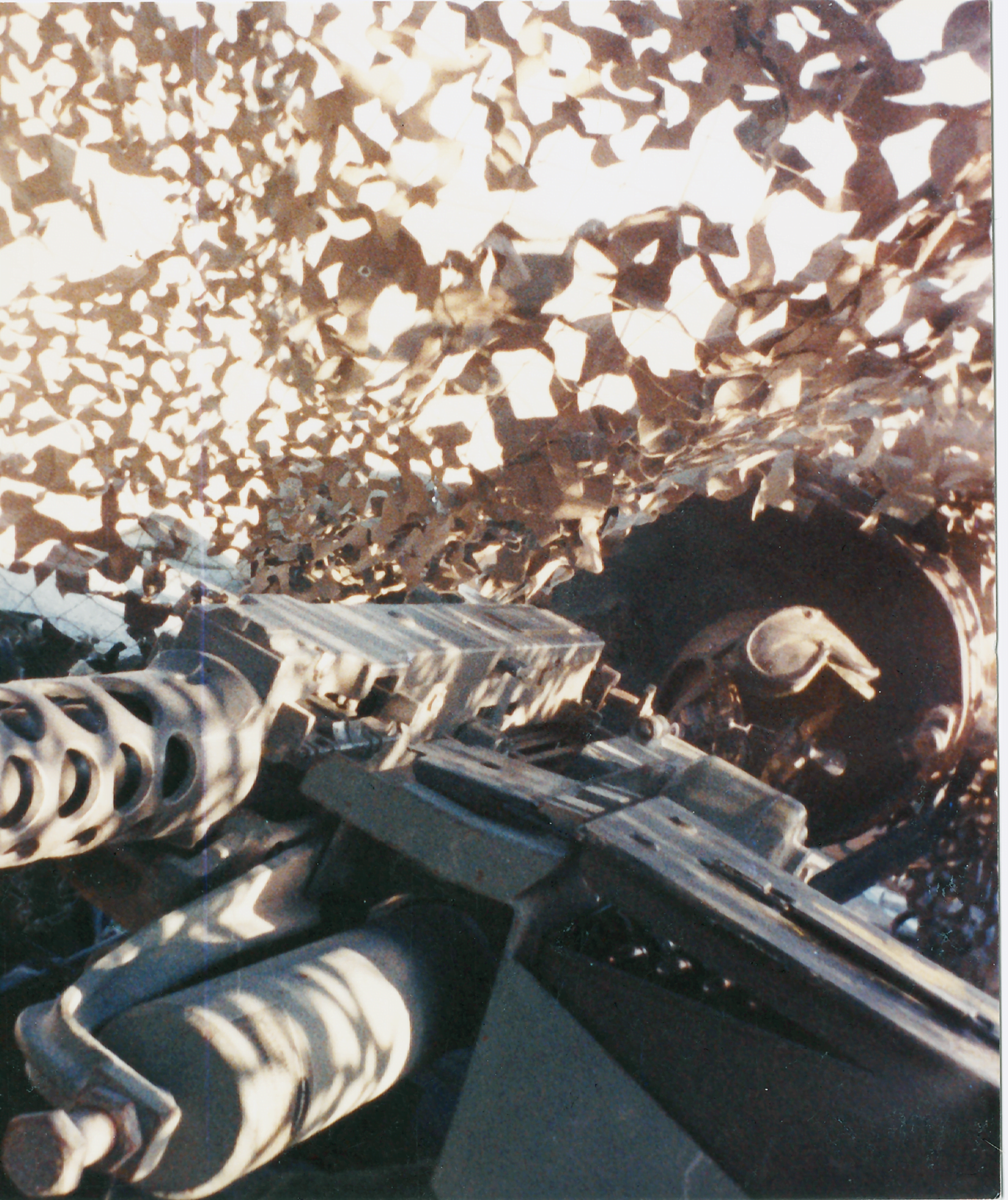 Continuing with the previous style, we find that even when having fun, time sometimes seems to absolutely crawl. Names in the entry will be flagged with an asterisk (*) and explained in an appendix below. Additionally, there are a few spots where I want to more completely flesh out some details, or explain my current mind about the goings-on, and they will be flagged with a dagger (†). Just a heads-up about why those symbols are there. As noted previously, dates and times are approximate.

In an unfortunate—for him—luck of the draw, Thomas* got yet another Chicken A La King MRE for lunch. Although I draw the MREs out of the box, I never look at what I pull out (per the LT’s request) and I just grab whatever I grab and people can swap if they want to. Sergeant Planter* is unwilling to trade his MRE, so Thomas has taken to pleading with me.

“I’ll take your guard shift tonight and you can have the crackers & jelly,” is his final offer.

I mull this latest development, fully aware that sergeant Young* is not going to go for a guard shift swap. The best outcome would be for us to work it out ourselves, and pray that tonight’s rotation isn’t the last one—because that shift wakes up sergeant Young, and his first question would be why Thomas and not Warren is on duty … which could well lead to both of us getting our asses chewed out, if not an Article 15 for each of us†. Not worth it.

However, working in Thomas’ favor is that I really don’t care what MRE I get. I know a lot of the guys can’t stand certain entrees, and maybe it could get kinda boring to have the same meal over and over, but I just eat it. I don’t even need to use the tiny Tabasco® bottles that come in some of the MREs, so I hoard those—right now, they’re commanding a pack of cigarettes per bottle.

“I’ll do my guard shift, but give me the Tabasco®, jelly, and cracker,” is my reply.

Yeah, he probably got away with one, and the Pork with Rice in BBQ Sauce MRE I gave up is a pretty popular entree overall, but whatever. I probably owe him anyway. I owe a lot of guys a lot of things.

Right now, it’s slightly overcast with thin, broken altostratus clouds playing peek-a-boo with the sun. There’s no breeze to speak of, maybe a very slight one coming from the northwest. It’s also about 58° F (14.4° C), chilly enough to keep sleeves down but not enough to warrant wearing a jacket.

It is eerily quiet every day about this time, and today proves to be the same. Partly, it’s because the only things going on nearby are the other tanks doing what we’re doing: eating lunch. The day’s temperature isn’t as high as it will get, but the wind always seems to kind of die down during lunch, too. It’s not pin-drop quiet, but pretty close.

I’m sitting on the top of the turret with my legs dangling into my loader’s hatch, with sergeant Planter standing in the TC’s hatch waiting for the LT to come back from yet another meeting with the troop CO, the other platoon leaders, and the rest of the troop leadership. Usually, if the LT has to head to the TOC we just drive him over there, but for some reason today they sent the CO’s hummer around and picked up all the platoon leaders.

Fortunately, we’d had the engine running not long ago to top off the battery charge and finish up our daily PMCS, so the back deck is still hot enough to warm up the MRE main entrees. “Hey, Errol, I’ma heat up my lunch, toss me yours,” I offer.

Without a reply, Thomas flings his Pork with Rice retort pouch at me. It’s a good thing I have ninja-reflexes, and I am able to snatch it like Mr. Miyagi’s fly out of the air before it sails off the tank entirely. I reach out for sergeant Planter’s main before realizing he’s already eating it (frankly, it’s Tuna with Noodles, and probably better at ambient temp 😂 ). A hop, step, and a crouch later and two MRE main thermostabilized entree retort pouches are simmering on the back deck of my tank, proving again why being a tanker is the best job in the Army, way better than being a crunchie†.

Lunchtime comes and goes, and despite my bribery attempts (two bottles of Tabasco® and two packs of actual Newport® cigarettes, out of my personal stash) sergeant Planter steadfastly refuses to part with his chocolate nut cake. I don’t blame him, but I figured I’d give it a shot. About an hour later a plume of dust from the approximate area of the TOC starts moving around the back of our screen line: probably the hummer dropping off each LT at their platoon’s position. Sure enough, after dying down around Red platoon’s AO, it comes zooming through the sky toward us. The cloud starts to approach a sizable rock formation just to the southwest of 22’s† hide position, and shortly after that the hummer appears, bouncing and rocking in all directions as it pulls up behind my tank. The CO’s hummer driver—not the same guy as my best friend Rob*, who drives the CO’s tank—stops just long enough for the LT to let himself out of a back door, then tears off toward Green platoon to the east.

LT Kwong* strips off his LBE, and tosses his map case, LBE, and Kevlar helmet onto the front slope. “Warren, can you hand me my MRE, and let sergeant Young know that we need another platoon meeting in like fifteen minutes?”

“Yes, sir,” I reply, grabbing his Ham Slice MRE and my Kevlar, handing him the first and donning the second while I double check to make sure my protective mask and sidearm are attached to me.

The LT looks up at sergeant Planter who nods back.

“All right, fine. Thanks,” he says, resigned to his meal.

I don’t know what the fuss is, the main is okay but it comes with the chocolate covered brownie, maybe the best dessert in the current menu of MREs. Okay, it does come with the side some have dubbed “potatoes aw rotten,” but I actually like them.

In any event, I hustle down and head over to 24 to let sergeant Young know about the meeting, and just for shits & giggles decided to continue down to 23, as well.

Ortiz* was standing on the back deck of 24, and called out, “Warren, was that the LT?”

“Yeah, he said to let everybody know we need to meet at our tank in about fifteen.”

As he hollered down into the turret, I made my way down to 23 and notified sergeant Jones* of the same thing, and hustled back to let the crew of 22 know as well. That proved unnecessary, as sergeant Miller* was already with the LT when I got back.

The LT devoured his lunch as the rest of the platoon—minus the OP and radio watch—gathered around our tank.

“Hey, Hedge*, is it just me or are you getting uglier?” I tease Hedges as he and the rest of 24’s crew approach, knowing he’s got a zinger waiting. There are a few slight chuckles from some in the crowd.

“Still not as ugly as your face,” he replies to scattered laughter.

Okay, that’s not the funniest one ever but it’ll do.

The LT’s briefing is reasonably short, basically just a notification that there will be a Class VI supply truck at the TOC this evening along with chow, and that the squadron CO is working on getting us a trip to a nearby Air Force facility that has actual working showers—something we haven’t seen in over a month now. Details will be provided once the arrangements are made. Aside from that no change to mission or posture, further updates as warranted.

A shower sure would be nice.

*: SPC Errol Thomas is the driver on my tank, and SGT Planter is my gunner. The TC is 2LT Philip Kwong. SSG Miller commands C-22, while SGT Jones is the gunner on C-23. C-24’s crew has SPC Hedges driving, CPL Ortiz as the gunner, and SFC Young as the platoon sergeant. SPC Rob Bell is the driver on C-66, and is my best friend as well as my barracks roommate … well, when we were actually at the barracks, of course.

Also, note that in the US Army, unlike the US Marine Corps, most sergeants are referred to as “sergeant so-and-so” in normal conversation, not “Staff Sergeant Blah” or “Sergeant First Class Blee.” This is not true of unit first sergeants or command sergeants major, who are always “First Sergeant Bloo” or “Sergeant Major Bloy” or whatever.

†: First, about a year and a quarter before this timeframe I had swapped out a weekend guard duty shift with another of my troop mates despite knowing that it was not acceptable to the unit NCO leadership (I just figured that, like most others, I wouldn’t get caught). Somehow, my platoon sergeant (still SFC Young, even at that time) found out and I got a royal ass-chewing as well as a summary Article 15 for being stupid, and totally deserved it. Although I don’t believe this was still a major issue while we were on this screen line, I sure as shooting wasn’t going to risk getting another ding for the same thing, something that might have resulted in a far more severe punishment.

Second, “crunchie” is what tankers call infantrymen—who call themselves “grunts,” presumably because that’s the noise they make when trying to speak?—in the spirit of intra-service rivalry. They call us DATs (for Dumb-Ass Tanker) or for M1 tankers, C-DATs (Computerized Dumb-Ass Tanker). In defense of C-DATs everywhere, though, the M1 tank exhaust makes up for a lot of what ails a soldier in the field, and so it shouldn’t be considered a mental disorder to want to sleep on the warm back deck of a tank instead of in a freezing-cold quagmire, eating food heated by that same engine exhaust instead of trying to warm up a pouch of Escalloped Potatoes with Ham in one’s armpit or groin.

Third, 22 (and 23, 24, and 21) are the bumper numbers of our platoon’s tanks. Since we are in Second Platoon (which, in the Regimental Armored Cavalry Troop system, is always a tank platoon), our tanks are 2-something, with 21 being the LT’s (my) tank, 22 being our wing tank, 24 being the platoon sergeant’s tank, and 23 being their wing tank.