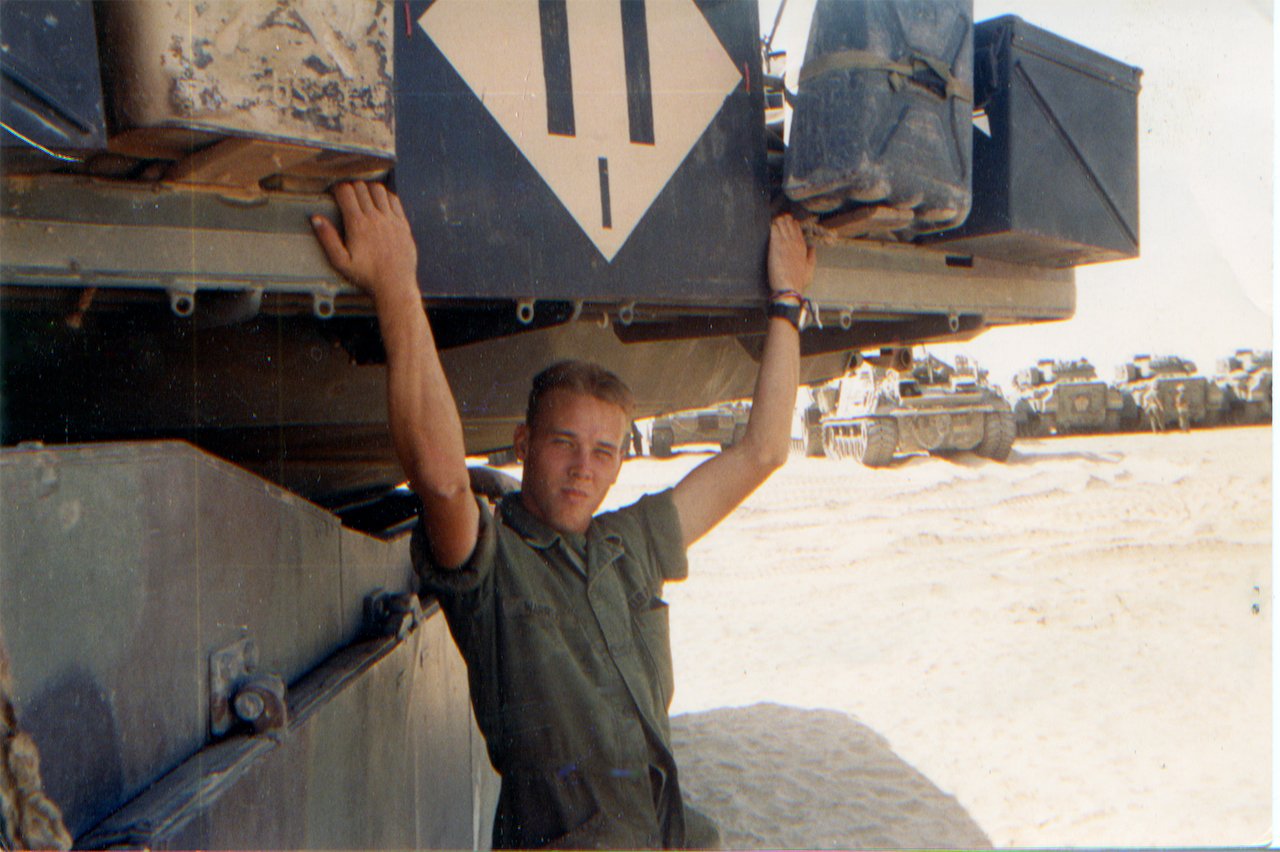 Staying in touch, 30 years ago

As with the previous couple of entries, I’m going to post another in this diary-style format, and at the end I will put up another appendix to follow up with modern eyes on a couple of items. Also as before, dates and times are approximate.

For the first time in a while, I actually remembered to do something I’d promised someone else that I would do† … I remembered to not only pick up batteries for my Walkman®, but to get extras for Hedges for his tape recorder as well.

I thought I was being smart, before we deployed for Operation Desert Shield, when I had the foresight to not only get the sturdiest, most well protected AM/FM/Auto-reverse cassette tape player Walkman® that Sony® made, but to bring several sets of headphones as well—two really crappy ones specifically to sacrifice, strip, and splice into the tank’s intercom system so that as a crew we could listen to music in our CVC helmets, situation permitting, and two really good ones for me to use when listening to music by myself. Hedges’ idea to bring a tape deck that had a microphone for recording, however, was inspired genius.

Now, I’ve both sent and received letters on cassette tape before. Although I was too young to remember it, when my father did his first tour in Korea he sent taped letters to my mother and I, and mom would record replies (mostly from her, but when I started speaking from me as well). I also sent and received a few taped letters while I was stationed in Germany myself, though once I got back to the states afterward I didn’t really use that format for correspondence. Since I hadn’t been in the habit of doing it at Ft. Bliss, it really didn’t cross my mind—but SPC Hedges sent taped letters home all the time, even before we deployed.

By and large, Hedges doesn’t really mind when people wanted to use his recorder, as long as he isn’t using it himself. I am an exception, however, because I forget that I have borrowed things from other people† and have earned a rental fee from Hedges for the use of it. He charges me batteries, and I had been fresh out for a few days.

However, just a couple of days ago the supply truck brought through a PX Class VI selection, and as each platoon cycled through dinner at the TOC we were able to make small purchases of items normally carried by the PX system—including batteries; cigarettes (limited to 2 cartons per person); sodas, candy, chips, and other pogey-bait; and other sundry items. I bought 8 AA batteries (the max one could purchase), and set aside 4 for myself and 4 for Hedges.

And so, just a few minutes ago I was able to repay him for a previous use of his recorder, as well as pay for the privilege of using it now—I’d received a taped letter from a couple of my female friends in Las Cruces, NM, and I want to record and send off a reply before things get really dicey. There’s really not a lot to report, but the girls are apparently having trouble getting replies back from someone in one of the other troops in my squadron, and I am doing my best to reassure them to just hang tight. What sucks is that I am certain they’re being strung along by this guy, but even if I could prove it now is not the time to be a jackass about it. So instead I try to be positive and cheery, and give the best generic advice that I can.

Guard duty will start soon, though as I have the shift after Hedges, he has graciously permitted me to use his recorder until he comes to notify me to relieve him. So, I have a few hours. Speaking of guard duty, it’s a good thing I didn’t take up Errol on his offer a couple of days ago; I was the rover guard and my shift woke up the platoon sergeant. Potential disaster averted.

Turkey slices with gravy, milk, bread with butter, scalloped potatoes. Not bad for T-rations. Along with my trusty Mountain Dew®, I feel like this was a good evening for food. I am a bit concerned that we haven’t received any mail in a while, seems like it’s been a month but I don’t think it’s been quite that long. Maybe two weeks. In any event, it’s been a bit of a slog trying to make this reply tape, partly because I have to stop recording, go back and re-listen to the tape they sent, then reply … over, and over. It’s nice to hear their voices, and to be able to reply in kind, but writing seems a little easier of a way to communicate. I did get it finished, though, so whenever we see the postal guy I’ll get that sent out.

I haven’t even set up my sleeping bag yet, as there’s no point really. It’ll be just a few minutes before I need to start my OP shift. I got lucky tonight, and get to sit in the OP instead of doing roving guard. It does kinda suck if you’ve got the shift at like 01:00 or 03:00, since you get woke up out of sleep and the temptation to fall asleep again is a little higher, but I haven’t gone to sleep yet so I’ll be fine. It’s also pretty cool, since you get to scan the platoon sector with the night vision goggles, watching as the Bedouins occasionally meander with their herds of goats and camels through the flat plain to the north of our position. Other than the occasional nomad, however, there is nothing in front of us for many kilometers. And that can make for a bit of a long shift.

“Warren, you in there?” Hedges pokes his head over my loader’s hatch.

“No problem.” He shuffles off, on his way to make sure Bautista* is up for his rover shift.

†: Again with the ADHD! It’s remarkable how I survived at all, let alone in the Army, with such a neurodivergent brain. Remembering to do things promised, or return things borrowed, requires a combination of memory actions within the brain, including being able to manage information in working memory and transfer it into longer-term memory for later retrieval.