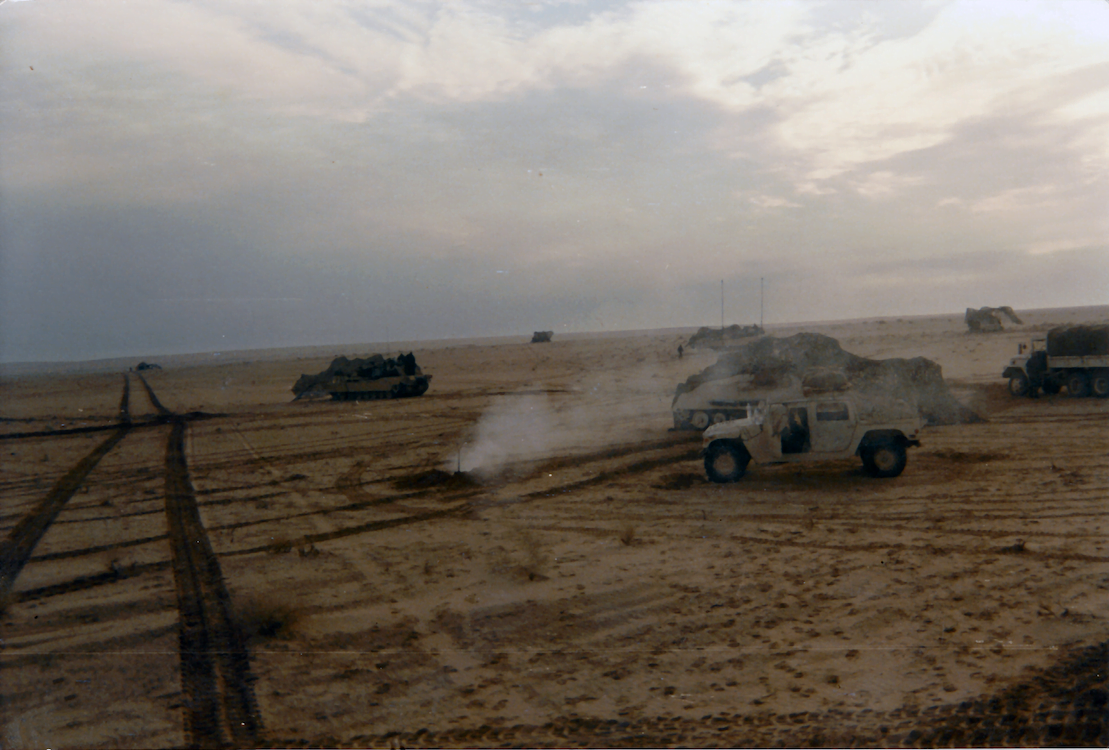 In contrast to my last post, my still-vivid memories of the morning that Operation Desert Shield became Operation Desert Storm, there are a lot of memories in the days immediately following that I can simply no longer access. In my memoir With It or in It: Desert Shield and Desert Storm from the Loader’s Hatch, there is an unfortunate gap in time between the first and second sections of the chapter on Desert Storm, which kind of sucks because although probably somewhat tedious to many, those are some of the memories that could really help give a sense to someone who has never been a soldier of just how obscenely boring it can be to sit in a combat theater when the combat does not (yet) involve you … a boredom that, improperly managed, can transition to complacency and a potentially fatal lack of attention to detail.

Some of the reason I can’t really recall any specifics might be because what happened immediately after—as I have incompletely pieced together from conversations with some of my brothers from Cyclone Troop and a few other units from 3d ACR—was not much different from A) what we had been doing in the few days prior, and B) what we did in the field in any simulated combat FTX (Field Training eXercise) when we were not actively executing a training evolution.

We did maintenance. We tested equipment. We lubricated things that should move, and cleaned lubricant off of things that shouldn’t. We had minor inspections. Our platoon sergeant yelled at us (though, most of the time, it was not because we did anything wrong, but because he would sometimes raise his voice telling jokes 😃 ). When not doing those things, we read and wrote letters, played Spades and Hearts and a variety of other card games, listened to music …

And posted guards. Guard duty might be the single most common military undertaking in the history of organized (and especially professional) warfare. Maybe not the exact details of it, and the details of how different militaries and different MOSes (Military Occupational Speciality, the “job” of a soldier) do guard duty is somewhat different, but the basic idea is universal: you tell one or more soldiers to prevent access to or through an area, and for how long. You tell them how to identify friend from not-friend, instruct them on what to do if someone is unable to identify themselves as “friend,” and instruct them on who they contact, and how, if there are questions or problems that arise. Then you have other soldiers ready to take over the guard, and rotate soldiers through the duty. It’s pretty straightforward stuff, really.

The trick is that it’s often ridiculously monotonous—and, frequently performed by soldiers who are already exhausted, and now also have their sleep interrupted to get up and go guard something. Additionally, it must be done at all times of the day or night in any weather condition, and (especially in the field) without any protection from that weather aside from what uniform items the soldier carries. These factors can combine to form a powerful disincentive to stay focused and disciplined, sometimes resulting in soldiers who fall asleep at their post or otherwise fail to properly perform their duties as a guard. I myself was not immune to such temptations in the years leading up to our deployment for Operation Desert Shield, and although it was still quite rare for me (and most soldiers I’d served with) when lapses did occur they were appropriately corrected.

During most of Operation Desert Shield, guard duty was rotated through our entire squadron since the base camp was occupied by the entire squadron plus attached units. Because of that, it was not something that came up frequently for individual units—much like being in garrison, in fact, the guard assignments were only one 24-hour period every few weeks, at most. Contrast this against how we would do guard in the field, with each platoon basically responsible for setting its own guards every night. Essentially, it guaranteed that every soldier would have a guard shift pretty much every night. As the days and weeks would drag on during a field exercise, it became more and more exhausting, and required more and more focus and attention.

Personally, that changed drastically as Desert Shield became Desert Storm. As noted, before that point we’d mostly been in our base camp, and with guard shifts being shared by a large pool of units it was not difficult to maintain attention and awareness on guard duty—it just wasn’t as disruptive. After that point, however, we were no longer in our base camp (and, unfortunately, my memory is mostly non-existent of the time between that first night or two and our unit’s later assumption of a screen line mission along the Saudi-Iraq border well off to the west of our initial placement in country, so I don’t recall what exactly went on, or for how long). We were in the field, and guard shifts became something that occurred pretty much every night.

These, however, were … different … guard shifts. Taking guard shifts and manning observation posts from that point on was much more a life-and-death situation. Don’t get me wrong, guard duty at any time is something to take seriously. Now, however, the reality of the circumstance added a flavor of consequence that I found impossible to deny. The edge of undeniable potential harm turned guard duty from a necessary—if disliked—function into one of urgent attention.

Yes, the tension of the entire deployment up to that point was real and ever-present. But after that point, it was far more profound.

I just wish I could remember better some of those days after the start of the “air war,” and before our screen line mission started.