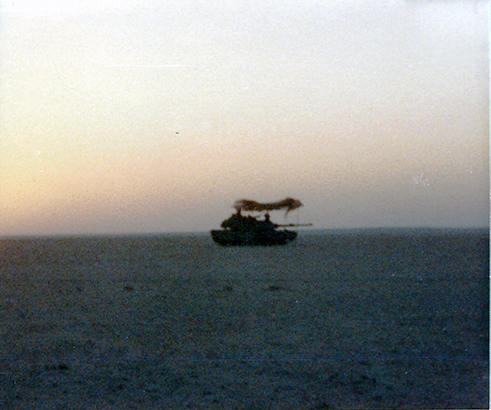 The Rime of the Ancient Tanker

Day after day, day after day,
We stuck nor breath nor motion
As idle as a painted ship
Upon a painted ocean
— Samuel Taylor Coleridge, “The Rime of the Ancient Mariner”

Keeping with the theme from the last post, even during those times when most of my memory is lost, there are still occasional things that stick out. Mail call, for example, was still a cherished activity. Even though it happened pretty much every day most of the time we were deployed, it was important enough to make a lasting impression even when other reasonably routine happenings have been lost to the ravages of time.

For my part, I was corresponding with several family members as well as a few friends I’d met while stationed at Ft. Bliss, and also a small number of people who had written “Dear Any Soldier” letters that I happened to come across. Many authors of such letters were school children, and I did my best to make sure they got a response whenever I could do so.

Wait, “whenever I could do so” … Didn’t I just kind of write an entire post about the humdrum, every-day-is-the-same-day-ness of some of the intervening time between the start of the “air war” and our assumption of a tactical mission a few days later? Well, yes, and thank you for paying attention, by the way. But the fact that it was often “day after day, day after day,” being stuck in the same rut as our intrepid Mariner whose Rime is quoted above does not entail days of doing nothing, with ample time to constantly compose correspondences sufficient to slake a sense of duty to those distant recipients—to the contrary, even during days that might have seemed as boring as being on a painted tank upon a painted desert, there were so many things going on, and they were always exhausting, that it was still a struggle to reply to letters that deserved more than a casual “I received your letter, thank you, it was very lovely.” Down time, especially down time that could be spent on sleeping, was coveted and sacred.

Now, to be fair, others perhaps had been better about that than I had been, and were able to find the time to not only get as full a sleep as could be obtained in that place but also to keep pace with their received posts. You see, one of the struggles that I endured that I don’t think was terrifically common amongst my peers was the struggle of an ADHD that had not yet been diagnosed—and would not be for another 28 years, in fact—but the symptoms of which were manifest in legion. I found it impossible to remember to do simple things, things that don’t faze neurotypical adults in the slightest—like remember that I had a letter to respond to … or that I still needed to replace the tool I’d used to perform some maintenance task so that it would be available, in the correct place, for the next time it was needed … or that I needed to brush my teeth, or any number of other things that are usually second nature to a child in primary school, let alone a 21 year old tanker with more than four years of experience under his belt.

So for my experience, the struggle to keep up with a whole slate of things (including letter writing) was profound, and even yet I sometimes get really mad at myself for having struggled with that (and for having lost contact with some people I would have preferred to not lose contact). There are a great many things, in fact, about my military experience that I feel quite confident would have been far more productive if the symptoms of my neurodivergent brain had been recognized and treated when they would have had the most impact (early primary school, for example).

One of those things, I think (and one that I feel a great sense of loss about) is the memories about some of these times during Desert Shield, Desert Storm, and Desert Sabre that are blank spots in my mind. I think it is unfortunate that our experiences in that conflict have been largely overlooked (due in part to the swiftness and overwhelming success with which we executed the battle plan, once it was started), and I feel that if I’d had the chance to learn the tools to combat my brain’s tendency to get lost on the way from the loader’s hatch to the loader’s seat (a distance of approximately 36″), I would be much better able to present our story in a more fully compelling and unforgettable way.

Alas, that is not how life has gone. So, in the meantime, I do my best to piece together those missing hours and days, and try to present them in a way that will give those who were not there an appreciation for the sacrifices that were made … as well as do right by my comrades, both those that are still around to reminisce about them and those who are not. We may have seemed “as idle as a painted ship/upon a painted ocean,” but it was not idleness that surrounded us.