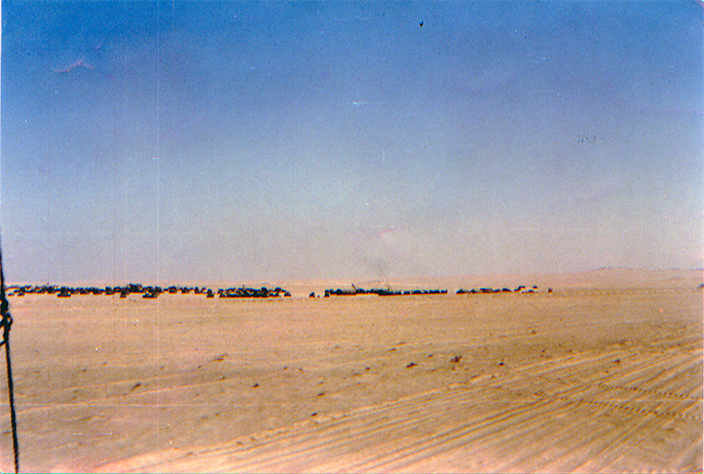 When we arrived in theater in October of 1990, we’d been primarily preparing to defend, and possibly counter-attack, against Iraqi forces continuing south from Kuwait. There were other considerations and plans made as time went on, of course, but for the most part from October 1990 through to early January 1991 we were housed in tents in a base camp with a makeshift motor pool and maintenance areas, and coiled up like a viper waiting to strike.

In early January 1991, while I was working with a small detachment of other Cyclone Troop and Tiger Squadron troopers to offload our new equipment, the rest of the squadron de-camped. They took receipt of the new tanks and Bradleys, signed over our old ones, and did a weapons zero and possibly other gunnery tasks (since I was not there, I am not sure what all was done).

But, up to that time, we were all essentially ambling through our days with that fog of “are they coming? Will we have to wake up one day in the pre-dawn blackness, plow through our pre-operation PMCS, and sally out of our camp in a somnambulant, blustery tempest to repel southward incursions of a massive, battle-hardened army?” It wasn’t a beach picnic 65 kilometers from the nearest shoreline, it was a deathly serious excursion … even though in my book and in previous posts I may have made it seem as if we were nonchalantly going about our normal, every day tanker lives with nary a care. It was just that, thinking back on the things I do remember and hearing from others about some of the things I don’t, one of the striking features of at least my experience (and, I suspect, that of many other troopers as well) is how much a lot of it was quite closely paralleled by my experiences during peacetime training.

There is, of course, a rationality to that reality. To paraphrase one of my favorite commanding generals, then-Major General George Joulwan (when I was in Germany with 3rd Armored Division), “you’ve got to make the scrimmage harder than the game.” Or, put another way, train in the worst conditions you can, against the toughest foes you can, and learn to win when all of the cards are stacked against you. Along that line is another quote that was often tossed around, “you fight like you train, so train like you’ll fight,” which is just a fancy way of saying that what you practice, you do. And so we practiced … a lot … in the field, in a variety of weather and visibility conditions, under a variety of simulated degradations—full organic support available, degraded support such as limited radio communications or a disabled maintenance section, virtually no support and just the tools and equipment on the tank as issued, that kind of thing.

Sometime in the few days after Desert Storm started, CENTCOM and 3rd Army HQ made a drastic change to our offensive plan, and the entirety of XVIII Airborne Corps moved quite a ways west from where we’d been positioned. The reasoning, of course, was that the Iraqi command structure had been essentially completely blinded as to our ground force locations, and was prepared against what they perceived to be the only logical course—head north through the minefields, fire trenches, and artillery presights, to be chewed up before a devastating counterattack from the Republican Guard southward and in our western flank. Instead, the plan was now to start a northward advance that resembled that, but to have the bulk of the heaviest units already farther west and to unexpectedly attack from the desert eastward into the flank and rear of the Iraqi positions.

As part of that repositioning, we in the 3rd Armored Cavalry Regiment moved west, then set up screen lines along the border to prevent any recon of our movements by Iraqi ground forces, as well as keep an eye out just in case they decided to do something that we didn’t expect like come across the border out west, instead of along the coast (which they did, of course, attacking Khafji in late January).

Here, again—at the risk of severely beating a long-dead equine—we did the same things we’d practiced over, and over. We set up our screen line. The Troop CO assigned sectors to each platoon, tanks got assigned sectors of fire, and we set up Observation Posts, guard plans, and went through all the same ole stuff we did for other screen line missions … but, with an edge. One thing I do still have is a few of the letters I’d received from friends and family during this time, and a common thread was that not only did the news seem to be a bit darker, our (or, at least my) letters home seemed tinged with that edge—almost like, subconsciously, we (or, again, at least I) had moved past any depression, anger, bargaining, or denial, and into acceptance.